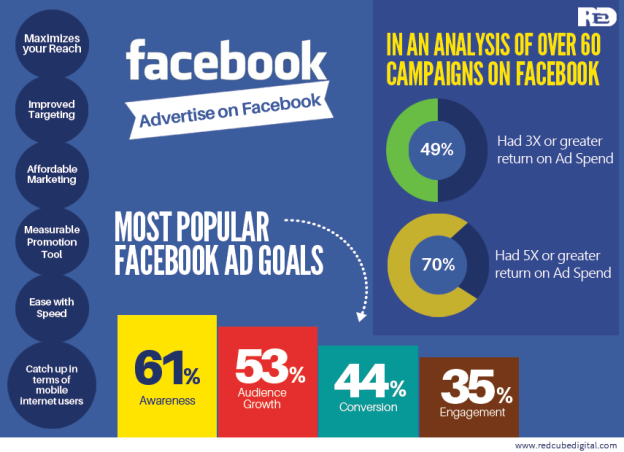 Facebook has mastered the art and science of conversations. Facebook is an indispensable traffic source for marketers and businesses. With an adoption rate that ranks over 1 billion, Facebook has changed the way a brand discovers users and breaks through a consumers’ mind.

Having introduced the Facebook advertising tool, this social networking site has definitely stepped into the world of paid promotions. The question still remains alive: how best to optimize your promotions using this paid tool? It is definitely one of the best tools which when used effectively can maximize your reach in a measurable way.

Facebook advertising is one of the several ways to market on Facebook, apart from the sheer number of users who can potentially see your ad. Here are five reasons why you should use this tool.

As mentioned earlier, Facebook as a social platform alone celebrates an almost unimaginable 1 billion users which literally translate it into a continent, just that it is present on the internet. Your target may be a part of the 1 billion users that make up this social networking site. If that’s the case, it is very important that you be present on this platform as well. By defining your presence, and using this amazing promotion tool, you can maximize your reach and engage more potential consumers.

If you have a set target, then Facebook as an Advertising tool helps serve easier. Adwords uses keywords to define the target, but Facebook uses demographics, interests and other insights that it can draw from the various groups to define and target its audience. The target is precise in this case, and depends on the type of business you are into, and the people who are interested in such businesses or services.

Less is more on Facebook. You spend as little as $1 a day, and in result, obtain maximum output. With this amount, you shall be able to reach a larger audience and that too with precise targeting efforts. You need to determine the bid types when advertising using Facebook: the cost per mile which promotes reach, cost per click that makes for active engagement, optimized cost per mile that promotes your brand to people who are your potential customers and finally cost per action which demands action.

You can leverage the power of Facebook’s easy and relatively faster ad campaign and set up your ad campaign in no time.

It is estimated that the total number of mobile phone internet users has risen. A good marketer must effectively use the power of growing mobile internet users through Facebook Advertising.
The reason lies in the fact that interestingly, Facebook has witnessed a staggering 61% year over years growth in mobile users. That translates to nearly 600 million monthly active users on Facebook. Facebook mobile ads have a CTR that is 14X higher than desktop ads.
Next time you are at a local pub or a checkout at the Airport, catch a glimpse at all the smartphone users. Majorly smartphone users will be engaged on Facebook. It’s just the way of being connected to the world no matter where you go. It’s another great reason to be involved with Facebook Mobile Ad Campaigns.