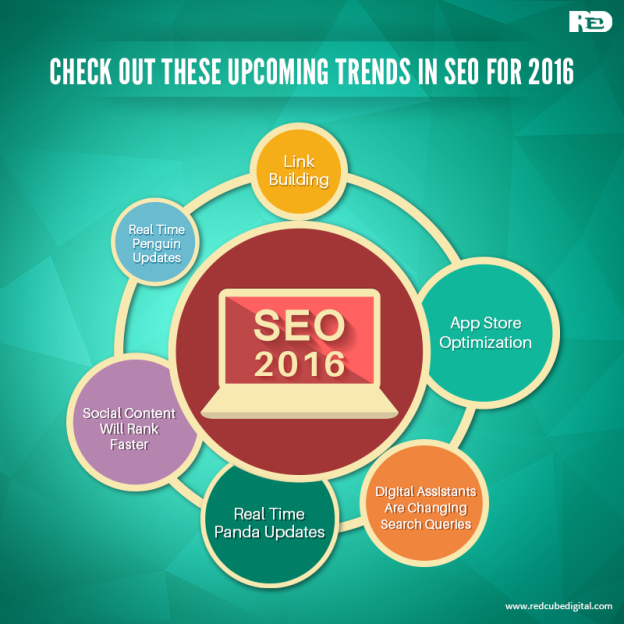 The process of website ranking is changed by Google every year. Since the last few years, there has been an erratic change in the process, ergo, it is expected that the coming year 2016 is also going to face a change. Our experts have narrowed down few upcoming trends in SEO that would definitely make the hazy picture clear & give us a better idea about the SEO trends to be introduced in 2016

• Link Building
A large number of spamming links aren’t required actually as it’s just the backlinks that should be of top-notch quality. If you stick with the method of building thousands of links, all your efforts are going to get wasted. Hence, the goal ought to be creation of links that people are tempted to click. Another point to note is that while videos & images form an integral part of a post. At times they do not count ergo they aren’t needed as Google still doesn’t have the ability to scan your uploaded images or videos. Your sole objective of using media content is that it should be articulate and convey what you are trying to say. If photos are used in your content, just make sure they are high resolution images without slowing down the website, as poor quality images tend to turn off the readers.

• App Store Optimization
App Store Optimization has become vital, as a whopping 52% of the time that was spent online was solely on mobile apps in 2015. A large number of businesses are expected to flourish that will initiate various ideas & products that would incorporate complete use of in-app A/B testing. A lot of stress is going to be laid on deep linking for relevancy & visibility for the app pages, as the year grows further. Measuring the in-app analytics is also going to be extremely crucial. Ergo, based on the number of conversions, click thru rates and open app rates, apps are either going to sink or swim.

• How Digital Assistants Are Changing Search Queries
Studies have shown that with the introduction of digital assistants, the search results are going to get more complex. Since the search queries that are spoken verbally are quite different than the ones that are typed, it is expected that the longer-tail keywords shall dominate the search engine this New Year. This type of search rewards the pages that employ a more conversational flow in the content.

• Real Time Panda Updates
Panda algorithm is expected to prevail in all its glory. We’re also expecting the panda update to arrive by the end of this year; this would lead a large number of web managers & the SEO agencies scrambling for answers. Ones who are prepared for it, would be able to use it yet again for their advantage.

• Social Content Will Rank Faster
Recently, Google has been in talks with other social media giants like Facebook & Twitter to make the content appearing on those sites appear more frequent in the mobile search results. Heading further in 2016, more such social media giants will become indexed. Also, the fine line between web content & social media content will diminish & soon be erased as we proceed towards 2016.

• Real Time Penguin Updates
The recent announcement by Google regarding the update of the Google Penguin in the early 2016 would make the SEO world a lot more competitive place than it already is. Penguin analyzes the quality of a given website & in case it is not as per the quality guidelines defined by Google, it is penalized. Ergo, concentrate on good quality content & the white-hat methods in order to stay ahead of the SEO wolf pack in 2016.

The above mentioned changes that are expected to be seen this New Year, are a boon for the web managers who take a good care of their websites & are not intimidated by Google. However, for the ones who try to get around the rules & regulations, it is rather safe to presume that a large chunk of websites are going to get weeded out by Google.