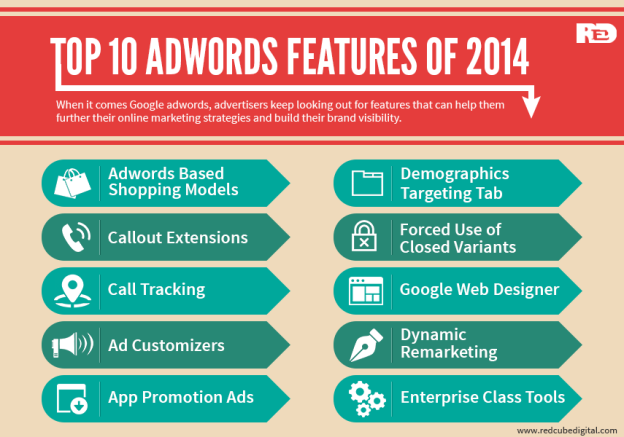 When it comes Google adwords, advertisers keep looking out for features that can help them further their online marketing strategies and build their brand visibility. Well, as of now advertisers won’t be able comment on the features that will come with Adwords in 2015. But, most advertisers are ready to share their experiences they had with adwords features which has helped enhance their brand’s image and visibility among the target audience.

Every year Google runs tests on the new features it had released that year, and checks what features worked best and how they work. Here is a list of top 10 adwords features of 2014 that Inflatable water slides Canada most online advertisers have been recommending for a while.

Around April last year, Google had finally given up on the traditional PLA that it used to run for shopping campaigns. They shifted their shopping campaigns to a new feature named “Adwords based Shopping Models”. This was a mandatory transition, which occurred sometime last August, post which retailers have shown positive advancement in their shopping structures and conversions. Some of the add on features available with this new feature include additional metrics and product specific bids.

Another feature that was produced by Google Adwords in 2014 was callout extensions. Most PPC advertisers have been recommending this feature as it is easy to use and maintain. The main reason it has become an instant hit is the huge impact it has caused on the people. Add the USP and other specific product details with the callout extensions. The flexibility of this feature allows you to create ads that can run across devices.

Remember the website call conversions feature that Google added? By just inserting the dynamic forwarding number, you could check on visits resulted from a click using a traceable number. Call tracking apps were being placed into the websites to track the location and check on sales and conversions obtained from the click. This was taking analytics’ a step further.

You could tailor the ad to match the search query with this feature and display it as a search result. Isn’t that a great Christmas gift for marketers? You can take action as per the search query and use the keyword being searched into your ad to enable more clicks. Flexibility and promise towards increasing your conversions is what makes this feature stand out.

This feature was first launched as part of the Google display network post which it became a part of Google adwords. With this feature, you can easily link the app’s ID on youtube to the TrueView campaign and tap into their customer base of Youtube which is 2.2 times higher than other places. You can easily display price along with the app name, icon and ratings in the video ad. You can run this along other Google networks too to cash in on the user base present there.

This has definitely been an impactful feature of Adwords in the present times. Before this feature was released, the demographic performance of the ad could be analyzed one parameter at a time. This feature changed the dynamics of viewing when it came with several parameters in one tab.

7. Forced Use of Closed Variants

This update enhanced how users searched with keywords. When your target searches using keywords, they do misspell! Initially adwords did not make proper allowance for this. But, now things have changed with this feature. You will see that with this feature close variant keyword and exact match queries did not account for misspells, which has changed. With this feature added, account management has become easy and effective.

Yes, you did have Google web designer with Adwords, but the revamped version is much better. You can easily upload your HTML5 based ads into Google display network and need not code any further. Now, that’s called flexibility. You also get updated events, timeline and component functionalities with this feature.

In 2013 Google had released a beta version of this feature, and in 2014 it finally rolled out its final version. It is well known that visual ads are more compelling as compared to contextual ads. But, creating visual ads was very difficult and tedious prior to this update. With this update, remarketing content ads using visuals became easier, as the feature allowed you to create image based ads dynamically after judging user behavior.

Google had released the all enterprise level tool which was available to all marketers and sets of users. With this powerful tool, ad spend could be lowered while enabling you to create effective and impactful ads that can attract your target consumers.